Speyside is a beautiful place, drive south you find the Cairngorms looming ahead, turn north and the elemental beauty of the coast contains you. Stay where you are and grows roots in the picturesque riverlands overflowing with milk and..  whisky. Distillery of the day: Glenrothes. So named for its location – It is literally on the banks of a ‘burn’ or small brook, that feeds the mighty Spey. It is the Burn of Rothes this far up from the Spey, and here it flows rather lazily. Just as well that the distillery’s water comes from a deeper soource: the Lady’s Well.

And Glenrothes needs much water because it’s no small distillery – 5 wash and 5 spirit stills with 5.6 mil L a year. Most of its production goes into blends as usual, but this distillery is unique in that there is no usual age specific core range. Instead they have a ‘Vintage’ range of vatted whiskies with a vintage year, a ‘Reserve’ range of NAS, and then the ‘Single Cask’ range.

Glenrothes wasn’t always this big. It started off with 2 stills in 1879 -opening on the same day as the famous Tay bridge disaster *, then expanded to 4 stills at the end of the 20th century. And again, beginning in 1963 when 2 more stills were added, it was also around this time that the heating and cooling was modernized, though the floor maltings went back in the 50s. By the 90s, Glenrothes was the 10 still behemoth it is today. Initially owned by a collection of individuals as William Grant & Co (not the William Grant of Glenfiddich), they quickly merged with the owners of Bunnahabhain to form the Highland Distillers Co. Edrington Group in turn bought out Highland Distillers in 1999, and most recently in 2010, Berry Bros the wine merchants and independent bottlers , with whom Glenrothes has had a long history of cooperation, finally bought out the distillery.

* A word about the Tay bridge disaster. A sad loss of life it was but made all the worse by the literary manhandling wrought by one Scotsman William McGonagall, widely acclaimed as the worst poet in the world. I give you this nugget from his ‘ The Tay Bridge Disaster’ :

I must now conclude my lay

By telling the world fearlessly without the least dismay

That your central girders would not have given way,

At least many sensible men do say,

Had they been supported on each side with buttresses,

At least many sensible men confesses,

For the stronger we our houses do build,

The less chance we have of being killed’

Also note the bulbous neck of the stills: (from the official website)

In other news – Whiskyrific is going on holiday! Off to Scotland for whisky and sightseeing, some walking, more whisky. Will be visiting Talisker, the over to Strathisla, Aberlour, Cardhu, Glendronach, Blair Atholl, Glenfarclas, then northwards to Glenmo, Balblair, Dalmore and Clynelish. So either delayed updates, or report at the end of the month! 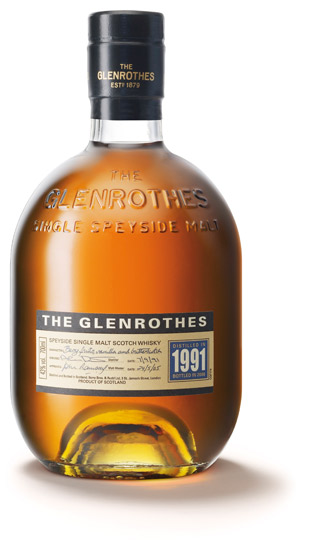 Nose: Ok clearly very oloroso influenced. It’s got these dry aromatic notes of nuts and earth/compost, cracking leather and sap. Very tannic in an aromatic way. Giving way to hot toffee, and a good dose of red fruit peelings on an old cedar board, which ushers in the fruit sweetness. It’s a thin and narrow sweetness, not ‘expansive’. Definitely noses like a blend.

Palette: As per the nose: Aromatic dry sherry, dry fruit ie really dry fruit and not figs for example. A drop of cough syrup, then sweeter and sweeter again with a red gummy sweetness. The sweetness is a bit one dimensional actually.

If ever there was a whisky that tastes as it noses, this would be it, until I find the next one that is. Still it noses and tastes well, very drinkable, with an engineered balance of dry aromatics and sweetness. Very nice whisky, clearly many excellent casks went into the vatting.

This entry was posted on August 9, 2014 by Whiskyrific in Glenrothes and tagged Glenrothes.