Sherry Basics for the Whisky Drinker

So Sherry is traditionally THE most important fortified wine for us whisky drinkers, because back in the day Sherry was what people got drunk on and most importantly, it was imported over to Great Britain still in the cask. This meant there were lots of empty sherry casks discarded and distillers used to do the rounds picking up freshly emptied casks to fill with new make spirit. Salivating yet? Yes back then most whisky was first fill sherry…

Today Sherry can only be exported in tanks, and the practice of moving Sherry in the cask is, as I understand, illegal. Scottish distillers literally pay for new casks used by Sherry bodegas and then returned to Scotland dismantled.

Sherry is a fortified wine made from the Palomino grape or else the Pedro Ximenez variety, in the region referred to as the Sherry triangle, between the towns of Jerez (hence Sherry), Sanlucar and Puerto: 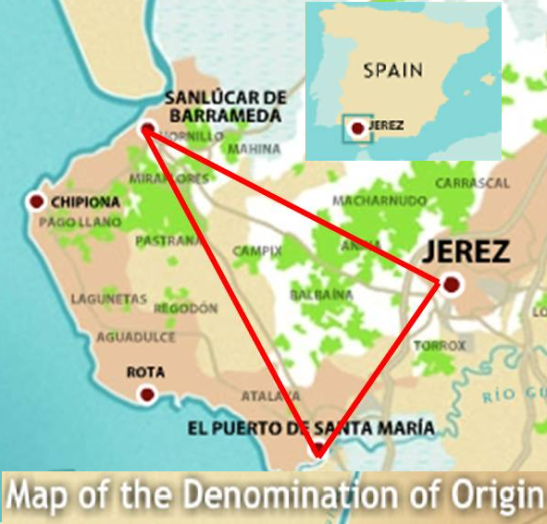 The Palomino is a wholly undistinguished grape, but for the peculiar way sherry is made, would not be chosen for any vinous qualities. You see, not the grape, along with the white chalky soil (Albariza), nor the skill of the Sherry houses are the point in Sherry – in fact, Sherry makers are at pains to remain as neutral as possible in the wine’s development, in contrast to modern winemakers. It is the flor, the terroir, the climate, and the aging of the Sherry that makes it distinctive.

Flor here refers to the layer of yeast like growth on top of Fino and Manzanilla Sherries that protect it from oxidation as well as aging the Sherry biologically. That’s flor growing on the Sherry: 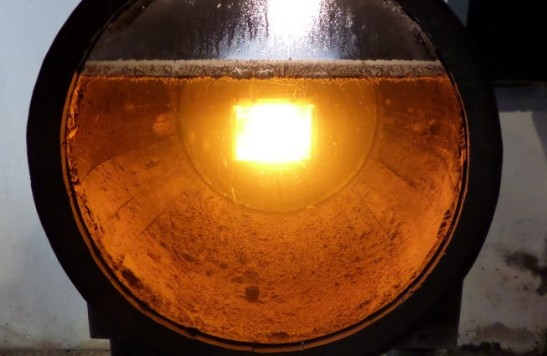 As for the difference between a Fino, Manzanilla, Palo Cortado, Amontilado, Oloroso, Pedro Ximenez? 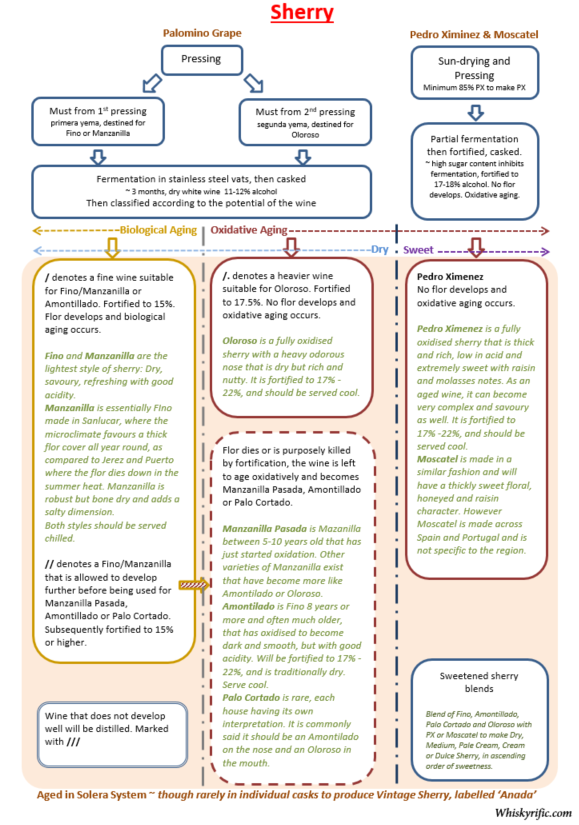 The Solera system is a bit of a misnomer in English. Solera really refers to the last ‘level’of butts from which the year’s bottlings are drawn off. The ‘levels’ above it are refered to as the Criaderas. Every year, a maximum of a third of the Solera level is drawn off to be bottled, a third of the 1st Criadera is moved into the Solera, a third of the 2nd Criadera is moved into the 1st Criadera and so on, and the year’s new Sherry is filled into the top level Criadera. Hence every bottle produced from a Solera will have at least a minuscule amount of Sherry from the original filing. No small feat when you consider some Soleras were set up in the 18th century!

What this means for Whisky

As whisky drinkers, some of us have a soft spot for sherry monsters. Typically matured in first or second fill Sherry butts, these are whiskies thick with christmas cake flavours, velvety rich and sweet – True indulgences. Occasionally, the thoughtful bottler might even detail what kind of butts they were from. Glendronach for example indicates if its whisky was drawn from Oloroso butts or PX (Pedro Ximenez) butts. The Batch 1 I reviewed earlier was bottling from a vatting of Oloroso and PX matured whisky. This suggests a complex whisky as Oloroso is a dry but rich and aromatic Sherry while PX is well..  PX.

Of course the distiller should gauge the kind of Sherry butts suitable for his distillate. Glendronach does fine in Oloroso, PX and Moscatel, but a Bladnoch matured in PX may be completely overpowered by the PX. However Lagavulin and PX are a match made in heaven. A lighter bodied Speysider might find good company in the form of a Fino cask, but the delicacy of Fino might be wasted on Ardbeg’s distillate. There is room in the middle as always, and Bowmore does equally well in Fino or with Oloroso. Maybe a Caol Ila then?

Does this go some way in explaining the preponderance of Oloroso butt matured whisky? Not really isn’t it – I have wondered why I have not come across more whiskies described as Fino Butt matured, or Manzanilla Finish. Certainly there are a notable few but they are in the clear minority. One possibility is that they have been there all along, but bottlers find it sexier to say Oloroso than Palo Cortado? Another thought that crossed my mind is that the nature of Fino and Manzanilla as biologically aged Sherry does not lend well to their deconstructed butts travelling long distance exposed to the drying air? Or might it be that the Oloroso profile is just preferred over the dry and savoury Fino?

But consider also that Sherry Bodegas do not change or renew Fino or Manzanilla butts often at all. In fact, the stable moisture and neutrality of old wood is preferred and the tannins of new wood a real problem for such delicate Sherry. There are still very old Fino butts commonly in use today. I can only guess the same is not an issue for the heavier richer oxidatively aged Oloroso butts – hence its greater availability to the Scots?

To end on a macabre note, a pipe of Amontilado, as all good students of English would know, was the drink Edgar Allan Poe’s inebriate Fortunato was lured to his death by. The man, no saint himself, ended his days walled up in the dank cellars of the Montresors. Read The Cask of Amontilado.

It seems, as drinks are wont to go, not just Sherry can be ill used for such vengeful purposes. Madeira too has its uses, stay tuned for Madeira Basics for the Whisky Drinker.

3 comments on “Sherry Basics for the Whisky Drinker”

This entry was posted on April 18, 2014 by Whiskyrific in Sherry Basics and tagged sherry.